The 8 Bits, known in Japan as Mamu Family (Japanese: 魔夢族 Mamū-zoku), is the name of the army of monsters that Wart commanded during his attempt to conquest the dream land of Subcon in Super Mario Bros. 2. The 8 Bits disperse around the entirety of Subcon, and can be encountered in every part of the land of dreams, from the grasslands to the part of the kingdom that floats high above the rest of the land. The 8 Bits aim to seize control of the Dream Machine, and seem to only wish to cause chaos with no ulterior motives.

A variety of different creatures make up the 8 Bits, the most prominent of which being Shy Guys, Pokeys, and Bob-ombs, which have made numerous appearances since their debut in Doki Doki Panic. For a full list of members of the 8 Bits, it is suggested that Mario Wiki's article on the subject be viewed instead.

There are seven major members of the 8 Bits, including the army's leader, Wart. These characters serve as the bosses that Mario, Luigi, Princess Peach, and Toad must face as they seek to save the Subcons from the frog-like tyrant. In the Game Boy Advance remake of Super Mario Bros. 2, Super Mario Advance, all of these characters are given voiced lines with all but Birdo being voiced by Charles Martinet; Birdo (and Robirdo) is instead voiced by Princess Peach's then-voice actress, Jen Taylor.

During the events of Super Mario Bros. 2, Wart's minions spread out around Subcon in order to cause mayhem and slow the progress of Mario, Luigi, Peach, and Toad. Many of the enemies found in the world of dreams would later go on to become frequent goons of Bowser's in his attempts to kidnap Princess Peach and take over the Mushroom Kingdom. Outside of minor changes detailed above, the 8 Bits appear in the same capacity in the game's remake Super Mario Advance for the Game Boy Advance, as well as a remake included in the Super Mario All-Stars collection for the Super Nintendo Entertainment System. Coincidentally, Super Mario All-Stars also features Super Mario Bros.: The Lost Levels, which was originally deemed as "too challenging" for western audiences and thus spurred the reinventing of Doki Doki Panic into Super Mario Bros. 2; The Lost Levels is known in Japan as "Super Mario Bros. 2" while the western game with that name is instead called "Super Mario USA".

In BS Super Mario USA, the sequel to Super Mario Bros. 2 broadcast via the Satellaview peripheral in Japan, the 8 Bits return to Subcon after taking refuge in another dream following their defeat at the hands of Mario and his friends. Their return causes Subcon's ruler to go into hiding and call upon Mario, Luigi, Peach, and Toad for help in defeating Wart and his army once more.

Many members of the 8 Bits make a number of appearances in the animated segments of The Super Mario Bros. Super Show! As Wart is absent from the series, the characters are instead members of the Koopa Pack and are led by King Koopa.

Mouser and Tryclyde are the members of the series that make the most prominent appearances, with the former acting as the second-in-command of the Koopa Pack. Like King Koopa and the Koopa Troopas, Mouser and Tryclyde often take on various different identities to match the world that they inhabit during each episode. While Birdos, Fryguy, and Clawgrip also make appearances in the series, the episodes in which they are featured are few and far between. A friendly Birdo, not affiliated with King Koopa, also notably appears in the series premiere "The Bird! The Bird!"

In addition to the five major bosses from the original Super Mario Bros. 2, all of the normal enemies affiliated with the 8 Bits also make recurring appearances as King Koopa's minions with the sole exception being Panser. Barring the giant versions of Ninjis and Shy Guys, Panser and Wart are the only characters present in Super Mario Bros. 2 to not make a single appearance in the series.

The voices of Mouser, Tryclyde, and Birdo are credited to John Stocker, Harvey Atkin, and Jeannie Elias, respectively. In addition to providing these roles, each also voice one of the main characters of the series: Stocker also voices Toad, Atkin also voices King Koopa, and Elias also voices Princess Toadstool. As many of the actors who portrayed the minor enemies are credited under "Additional Voices", it is unknown who voiced much of the roster of the 8 Bits; it is known that the aforementioned John Stocker, Harvey Atkin, and Jeannie Elias also provided the voices of Beezo, Snifit, and Shy Guy, respectively; while Lou Albano, who also portrayed Mario in both the animated and live-action segments, provided the voice of one of the Pidgits in the episode "Mario's Magic Carpet". 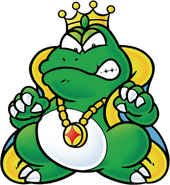 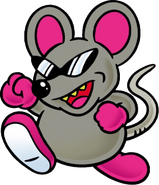 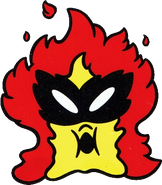 Birdo & Mouser, as they appear in Super Mario Advance 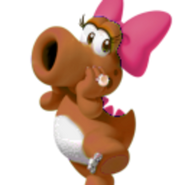 Birdo, as it appears on the SMB2 Boxart

The 8 Bits on the Doki Doki Panic Boxart 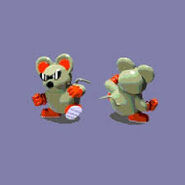 Mouser, as he appears in Super Mario Advance 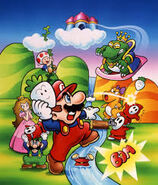 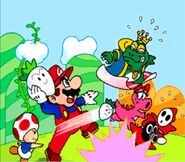 The Defeat of the 8 Bits 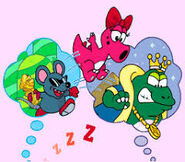 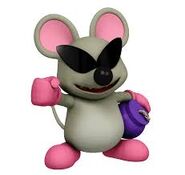 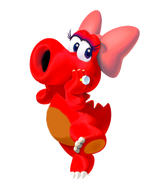 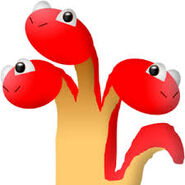 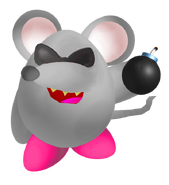 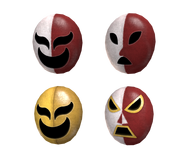 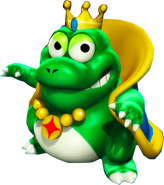 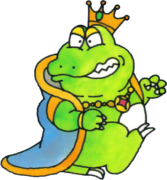 The 8 Bits in Subcon 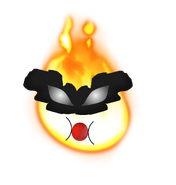 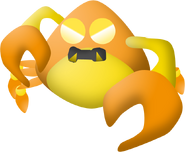 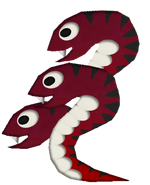 Retrieved from "https://fantendo.fandom.com/wiki/8_Bits?oldid=3270975"
Community content is available under CC-BY-SA unless otherwise noted.