4102 is a game by Bomb Productions Games. Since it is a Bomb Production, please do not edit except for spelling errors. It is for the Nintendo Wii and chronicles the exploits of four battle robots in the year 4102 on Earth who try to preserve rock n' roll. Not much is known about the game yet other than the basic plot, but it is set for a 2011 release.

(The following has been revealed by BPG following the title and one-sentence synopsis announcement...)

In the distant future, the planet Earth has recently undergone a population change; following an invasion by extraterrestrials, the Earth has decided to "adapt" and reproduce with the aliens, creating a society of superintelligent Human/alien hybrids. One hundred years has passed since then, and it is now the year 4102. Within the century, the new population has evolved greatly, being smarter than any average human, and have entered a new age that far surpasses Digital. The new population has also evolved past the needs of, or at least they think they have, emotion. Therefore, they have made music obsolete. The only thing remotely close to music that society has is a genre that, essentially, consists of heavy techno beats that are so unorganized that they aren't actually beats with a good portion of "beeps" and "boops", accompanied by severely edited and distorted autotune that is practically incomprehensible. Among other things, they have also developed sophistacated robotic technology. Besides the constantly-working Home Matinence Droids, the most common type of robot are the Battle Droids, relatively simple laser-shooting robots that protect the general population alongside the police force. In the city of N'Yrk, the bustling city that once was New York, four Battle Droids, among many others, protect the streets. These droids are X-OLLY, Y-TROY, Z-DOLPH, B-ZAK, all of which, despite being robots, burst with personality. One day, while searching for criminals in a landfill after getting a report, they stumble across a strange device, over 2,000 years old. X-OLLY, the leader of the group, decides to analyze the device and download its contents. The data that comes to them is a shock: Classic rock. After discovering the wonders of music and how it has been lost and outlawed over the years inspires the droids to rise against their superiors and preserve Rock N' Roll, whatever the costs... 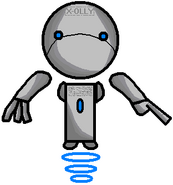 X-OLLY's artwork for the game.
Add a photo to this gallery
Retrieved from "https://fantendo.fandom.com/wiki/4102?oldid=2065312"
Community content is available under CC-BY-SA unless otherwise noted.