3DS Tennis (テニス3DS Tenisu 3DS in Japan) is a tennis video game developed by Play! Software Planning and the second game in the 3DS series. It was released to the Nintendo 3DS system. It's a follow-up to 3DS Play. In this game, some Miis are participating of a tennis tournament. Like it's predecessor, the game contains 3DS Coins.

It's the first game in the series that use the StreetPass feature and can be played with online with Nintendo Network.

Players play as their Miis, who are participating of tennis games. To win, the player must score 60 points by hitting the ball to the other side of the court and hinder the player to hit it back, like real-life tennis games. The players earn fifteen points every time the opponent misses the ball.

The player can choose from 2 to 10 pairs in this game. Each player will play matches against an opponent to win trophies and unlock new cups. As far as the player is, the opponents get harder to beat. This mode have four cups: Bronze Cup, Silver Cup, Gold Cup and Platinum Cup.

By collecting 3DS Coins, the player can unlock minigames that require them to complete tasks instead of just scoring points. They are: 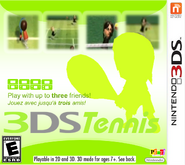