3DS Play, known as プレイ3DS Purei 3DS in Japan, is a party videogame for the Nintendo 3DS and the first in the 3DS series made by Play! Software Planning. It is compound by minigames that use the Mii characters created in the Mii Maker.

3DS Play consists of 20 minigames, made for one player. Each have a unique way to be played, like pressing the A, B, X and Y buttons and the Circle-Pad (or the D-Pad), tapping the touch screen, tilting the system or moving it using the gyroscope.

To unlock a game, the player must collect 3DS Coins, special coins that can be obtained in every minigame. They come in four varieties: little bronze coins (worth 1 point), small silver coins (worth 5 points), normal-sized gold coins (worth 10 points) and large platinum coins (worth 50 points).

The player uses their Miis made on the 3DS's Mii Maker.

The player must place Miis and objects on a checkered board and make them to reach a flag somewhere in the stage. The player can place special tiles that can make the Mii to change directions, jump some spaces or teleport them. The boards also have obstacle tiles that can contain flames or that can be stepped only once. This minigame has 50 levels.

The player controls a puffy Mii that floats and flies up. The player must avoid obstacles while collecting 3DS Coins. Obstacles include: birds with pointy beaks that cross the screen, spiky spheres that block the way, falling coconuts and cannons that shoot cannonballs. This minigame have 50 levels.

The player's Mii is in a stage, along with a guide Mii. The guide Mii will randomly lift legs and arms, and the player must repeat these moves by dragging and pulling the Mii's legs and arms on the touch screen. If the player misses a move, the game is lost. This minigame has 20 levels.

In this game, the player must bomb a wooden structure until the Mii (placed on the top of the structure) reaches the line indicating the goal unharmed. If the Mii slides from the structure, the game is lost. From the level 25 on, metal planks appear along the wooden ones. This minigame has 50 levels.

The player must tilt the 3DS system to guide a ball to the finish line. The course can contain shock rays, spikes and moving platforms, among others. This minigame has 50 levels.

The game is set on a beach, where some beetle-like bugs that walk through the area. They can come in black, red and blue varieties. The player must circle black or blue bugs with the stylus. Black bugs will give the player 10 points, while blue ones give 20 points. Circling red bugs will cause the player to lose 20 points. The game has 20 levels.

The player controls his Mii, who is piloting a spaceship in outer space. The ship will go straight up, when some small space monsters start to appear and attack the ship. The player can shoot fireballs in the monsters. In the end of each level, a boss (who is usually a large version of the monsters species) will be fought. This minigame has 50 levels.

The game involves the player's Mii, who needs to climb different-sized mountains. The mountains can contain rolling spiked balls, vines, platforms, or creatures, who can help or disturb the player. As the levels are won, the height and theme of the mountains. The player also can collect 3DS Coins. With 100 units, the player can shake their 3DS to create a quake, causing every enemy in the screen to be defeated (however, they will be later replaced). This minigame has 50 levels.

In this minigame, the player competes in a boat race against two, three, or four opponents. Sometimes, there is water in the course, which can hinder acceleration in the opposite direction. The courses also contain many rocks. There are 3DS Coins in the water. This minigame has 20 courses.

The player controls his or her Mii in a giant sheet of paper where are some squares, and a map of the squares can be seen in the bottom screen. If the player stays on a square, the line and column that contain the square will flash and two questions will appear in the touch screen. The player must solve the questions and write the word in the line or column (the letters will be must be recognized by the game). The game is won if every word is found. This minigame have 50 levels.

The game starts in on the ocean, where the player's Mii is in a surfboard. After the countdown, the surfboard will start to move forward. The player can change the direction by tilting the 3DS system left or right. The object of the game is to pass through the rings in the course. Some will be in the air, so, the player must jump to reach it. There will also be 3DS Coins on the course. A silver ring gives the player 5 points, while a golden ring gives the player 10 points. This minigame has 30 levels.

In a construction site, the player's Mii wields a hammer. The player must use the hammer to break all the bricks in the stage, sometimes revealing enemies (such as hammer-throwing robots) or 3DS Coins. Sometimes, wrenches and bricks will fall from the sky and the player must avoid touching them. As the game advances, bigger bricks will appear and require more hammering to break and metal blocks, that can't be broken. This minigame has 50 levels.

In this game, there's a block structure in every level, with a platinum 3DS Coin on the top. The player must control the Mii and pull and push blocks to create a passage to the top. This minigame has 50 levels. 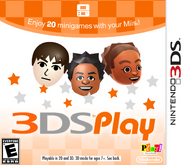 3DS Play Boxart.
Add a photo to this gallery
Retrieved from "https://fantendo.fandom.com/wiki/3DS_Play?oldid=2658497"
Community content is available under CC-BY-SA unless otherwise noted.