3-Up Moons (also called Rare Coin Moons) are very rare items that appear in the Super Mario series. They are crescent shaped moons and have eyes and a smile. They have a similar effect as a 1-Up Mushroom, except they grant Mario with three Extra Lives insead of one. Because of this, they are very rare.

In their debut, Super Mario World, these items could only be used once, meaning they never appear again in the level where they were picked up. This means that the player must use it wisely.

After long absence, the special item returns in this game. Unlike Super Mario World, they appear again everytime the player picked it up and replays the level.

They reappear in the game based on their original appearance, Mario 3D World along with the 1-Up Mushroom and the new item, 10-Up Star.

3-Up Moons reappear in Super Mario Finale. Because the game does not have a Lives system, collecting a 3-Up Moon simply awards 300 Coins. On the official website, the 3-Up Moon is referred to as the Rare Coin Moon in reference to the large amount of Coins it gives. 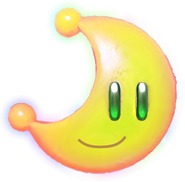 Appearance of a 3-Up Moon in Super Mario Finale 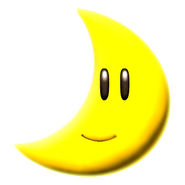 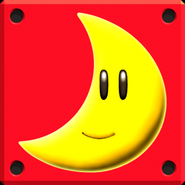 3-Up Moon sprite
Add a photo to this gallery

Retrieved from "https://fantendo.fandom.com/wiki/3-Up_Moon?oldid=3198163"
Community content is available under CC-BY-SA unless otherwise noted.