1-Up Mushrooms are a type of Mushroom that are very common in the Mario series. It will give Mario an extra life if he grabs it. There are various ways to get 1-Up Mushrooms, mostly from ? Blocks or Hidden Blocks. Jumping on six Para-Beetles in a row will also get Mario a 1-Up Mushroom.

The 1-Up Mushroom is shown to be a mushroom that has a green cap with white spots, a white stem, and black eyes.

The 1-Up Mushroom is capable of giving Mario an extra life when collected. These extra lives allow Mario to retry the course he's currently on and prevent a gameover.

1-Up Mushrooms appear in SMWWii, along with the brand new type called the 1-Down Mushroom, which takes it's user's life away without killing it.

1-Up Mushrooms reappear in the do it yourself game New Super Mario Bros. D.I.Y. along with its poisonous counter-pattern the 1-Down Mushroom.

Despite the Wii U/3DS title lacking any sort of life-system, 1-Up Mushrooms still appear scattered within the 10+ worlds, where their new purpose is to completely refill the player's health gauge.

1-Up Mushrooms reprise their role from the original Super Mario Bros. trilogy in this game, adding one life to the plumbers' total.

1-Up Mushrooms appears in Super Mario Moose as items. Like in past games, they grant the player an additional life.

1-Up Mushrooms appear once again in Super Mario Moose Deluxe, where they act the same as in the previous game.

1-Up Mushrooms appear exclusively as part of events in the game, where a single 1-Up Mushroom is in the center of the map, which can be obtained by either army if they get there first. It revives one previously defeated character, which can be handy for reviving powerful characters that met an unfortunate end. 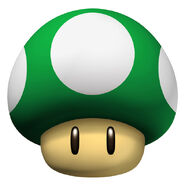 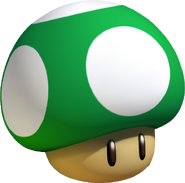 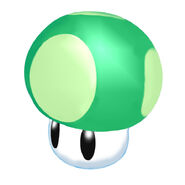 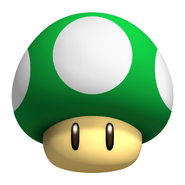 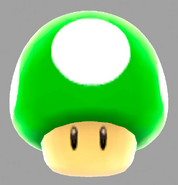 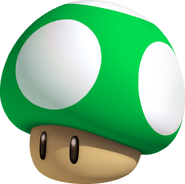 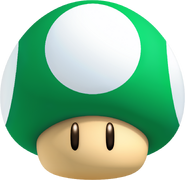 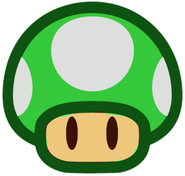 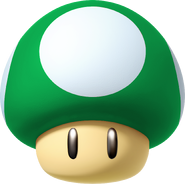 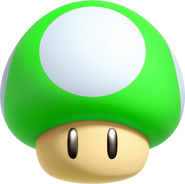 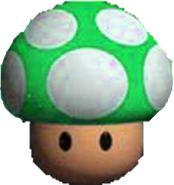 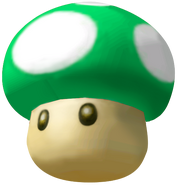 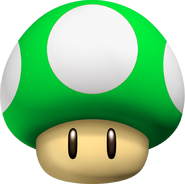 Add a photo to this gallery
Retrieved from "https://fantendo.fandom.com/wiki/1-Up_Mushroom?oldid=3327982"
Community content is available under CC-BY-SA unless otherwise noted.