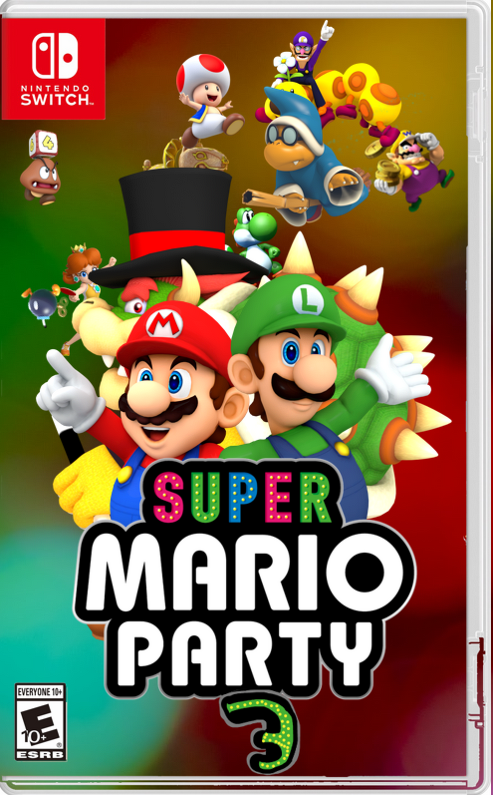 As all the old Mario Party games developed by Hudson Soft had their own specific theme that augmented either the story or the gameplay or even both, Super Mario Party 3 goes back to that idea, using the idea of a television game show to augment the story and the gameplay. The story side of the theme involves Mario and friends going on a game show named Fun Guys Fantasia hosted by a talking Piranha Plant named "Party Piranha", in order to win the Grand Star of Glamour, the gameplay side of the theme has the players put into a game show styled challenge at the end of five or ten turns, depending on how many turns the player has set for their game.

Like the previous two games in the series, Super Mario Party 3 takes advantage of the Switch hardware for its minigames, such as using the Joycon's pointer to aim where you're going to throw a dart at a board. The game also gives players the choice of playing the game in handheld mode, altering the controls to suit the play style, unlike the previous two games.

"Come on down and join the show! When Fun Guys Fantasia is on the air, there's no stopping Mario and friends from partaking! Try your hands at the four party modes we have in line for you party animals out there! The fun has just begun in this party popping shindig!"

The story starts out with Mario receiving an invitation from an unknown source to come join a game show in New Donk City, as he reads down he sees a messed up signature and the address of the building of where the game show will be filmed. Telling his friends, they take a plane to the Metro Kingdom and are introduced to the host of the show at the airport. He introduces himself as Party Piranha and tells Mario and his buddies that they will be put through a series of challenges and events that will put their skills to the test.

After whoever is the last man standing on the game show gets through all eight boards, and is rewarded the Grand Star of Glamour, everyone of the characters congratulates the selected character for being victorious, but are all given a nasty shock when Party Piranha pops out behind the star and claims that the player must fight him, in order to be fully victorious and vigilant. After winning against the host, the game ends with the characters spending the rest of the night, partying in the plaza of New Donk City.

Super Mario Party 3 retains the series signature formula of board play where four characters travel across a game board with a special gimmick in order to obtain coins, so that they can buy Stars for whatever selected price the player has set. The game starts off with Party Piranha explaining the objective of each board and how to get the Star on each board, showing the location of the Star, letting the characters roll their specific dice to see who will go first and who will go last, the highest number determining who will be going first, and then giving them five coins to build upon and spend on the Star.

At the beginning of a player's turn, they will get to decide what dice they roll, if they want to use an item, or if they want to view the map of the board. The character will then roll the dice and move the amount of spaces indicated by their roll, and a specific event will occur based on the space they land on. For example, a blue space will reward the character with 3 coins, whilst a red space will take 3 coins from the character. Prior to the start of each game, players roll a dice block to determine the turn order.

In Partner Party, 2-vs-2 and Team minigames appear on the minigame roulette all together, as there are no colored spaces in this mode. In Bowser Party, only team minigames will appear if a team lands on a VS space. Co-op minigames can also be played if the Bowser team catches up to the Mario team. In Power-Up Party, 4-Player, Rhythm and Battle minigames appear on the roulette together as there aren't any coloured spaces in this mode and are only triggered by popping a Coin Balloon.

After every five or ten turns (depending on the number of turns that the player has set for their game), the four players will take part in a Challenge Minigame, where Party Piranha puts them in a series of challenges that either involve dodging obstacles so that they don't get knocked off of the stage, racing each other to the finish line or fighting a boss. The prize for winning the game, depending on who came first, second, third or fourth, is a Star, 50 coins, 30 coins or 10 coins, in that order.

Coins are collected after winning a minigame, landing a blue space, or winning special events that take place on the boards themselves. Coins are used to buy Power Stars, which are needed to win the game. Depending on the goal for each board, the player has to build up a number coins needed to buy the star, and buy that Star with that amount of money, when they reach the Star space. Coins can also be used to buy items from Flutter which can be used to help the player or harm other players or to get a ride from Paratroopa who can take to a space where one of the other players is standing.

Much like the previous game, a Last Three Turns Event is hosted by Party Piranha. Unlike the previous game however, Party Piranha will get straight to the point, show the players' current rankings, and give a little item to the player in fourth place, also allowing the player to select a random board event that could help and hinder the players. The board event can include; doubled coin spaces, Blue and Red Spaces switched, the Star price being doubled, or coins being distributed evenly between all players.

The main mode of the game which involves the traditional Mario Party gameplay of rolling a dice and moving around a board to reach the star. Up to four players can play on this mode. The game can be paused at any time during play, which will display the number of turns, as well as other options available. These options include changing computer players to human players and vice verse, adjust computer difficulty, view or skip the minigame explanation screen, adjust which minigame pack is being played, change message typing speed, save data, or quit from the game.

This mode has two teams of two players all independently navigate around the same boards as in the Mario Party mode, except the boards have become nonlinear in a grid-like fashion, similar to Toad Scramble from Mario Party: Star Rush. The amount of turn options are the same as Mario Party, though players can select their team configuration prior to starting the match. In this mode, teammates share their items, coins and stars, and, in a feature introduced in Super Mario Party, share their dice roll amount as well. Players can additionally collect allies on the board, though the ally's benefits occur only to the teammate who collected that ally.

Similar to the previous game, players create a team of four Heroes and face off against a team of four Villains. The only main difference between this version of it, and the previous version is that instead of having characters like Bowser, Wario, Waluigi, Goomba or Koopa subjected to being on a villains team, any character can be put into any team. The main objective of the game is different to the previous game, as the goal now, is to make sure that the opposing team loses all of their hearts by fighting against them in Team Minigames after both teams have had their turn, or by coming in face to face combat when one member passes by the member of the other team. Duel Minigames are played when a member lands on a Duel Space.

Much like Balloon Bash in Mario Party: Star Rush, four players are put in the same grid-like fashion of the selected board and are able to move freely instead of linearly. The main objective of this game is to steal each other's Coins from one another using the game's offensive items, and competing in Battle Minigames after popping a Minigame Balloon. Items cannot be bought at shops because of how the goal is to collect coins, so the only way to obtain items, is by hitting an Item block found on the board. Unlike the other three modes, there are no allies present and is plainly just a Battle Royale between four players with no assistance.

Players can choose to play any of the minigames they have unlocked whilst playing the game. After a minigame ends, there is the option to play it again, play a random minigame, go back to the minigame selection screen, or go back to the main menu. Holding down the minus button in this mode will instantly restart the minigame being played.

Players are fighting to be the minigame champion. Before the game begins, players choose how many victories are needed to win (3, 5, 7 or 10) and the types of minigames that can possibly appear (not including Co-op minigames). The first player to win the set number of minigames, wins the game.

Players are summoned to the inside of a Bank Vault, inside the vault, Star Coins are hidden. After beating a minigame players have to look for a Star Coin. If the player finds that one Star Coin in the hidden piles of coins, with their face on it, then it is theirs, but if it doesn't belong to them then the same minigame starts again. Whoever finds the most Star Coins is the winner.

The first player to reach the goal is the winner.

Players compete in a tile-based battle and capture territory by winning minigames. The winner of a minigame chooses a panel on the board to mark it with their color. If a player brackets another player’s color with two panels of their color, that player captures the panel they trapped. Once every panel of the board has been completed, the player who has the most panels of his own color wins the game.

There are 37 playable characters in Super Mario Party 3. Of these characters, 29 of them are available from the start while the other 12 need to be unlocked through the Stage Shop.

Super Mario Party 3 contains eight boards that can be played in all four of the party modes, with them having different board layouts in each mode. Each board shares the same location, but will be altered to have either a path-based, grid-based, or linear board layout depending on the game mode being played. Unlike the previous two games, the boards are significantly bigger, with the standard dice roll going up to the number ten, while the special dices have numbers that are much higher than ten.

Octopus' Garden is an unlockable board, that can be unlocked in the Piranha Punch-Off mode, which acts as the main mode of the game.

Bubbles Galore this slippery board, don't carry any sharp objects!

In this scorching desert of anger, Pokeys inhabit this board, but don't take kindly to intruders, but don't think you'll stand a chance against the Legendary Sandmaragh!

Attop this mountain lies Shy Guys who want to be fat for fun. Be careful when you climb to the bottom though.

Travel through the coin invested boardroom of machines and addictions for fun.

Walk through the slimy stinky paths of this dank hole of Urchins and Cheep Cheeps.
Community content is available under CC-BY-SA unless otherwise noted.
Advertisement