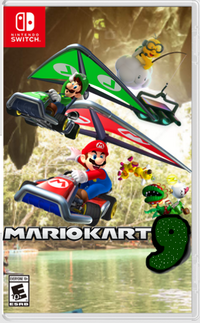 Mario Kart 9 is a racing game developed by Nintendo EAD and published by Nintendo for the Nintendo Switch. It is the ninth instalment in the Mario Kart series. Like every other Nintendo Switch game, this game can be purchased both physically at retail and digitally through the Nintendo eShop. The game was released in the middle of June of 2022.  In this game, there are two new mechanics introduced into the series,  Subterranean Racing and a Day and Night cycle. Gliding and Anti-Gravity return from the two latest installments in the series, and they remain unchanged.

The gameplay of the game is very similar to past installments in the series, especially the two most recent installments and Double Dash!!. Keeping the traditional gameplay from all Mario Kart games, players can pick characters that differ in weight classes and drive vehicles that have different stats around courses (some being rather simple courses while others are hazardous) in hopes of making it to the finish line in first place. The number of Karts on the track is added up to sixteen.

Gliding and Anti-Gravity return from the two latest installments in the series, and they remain unchanged. However three more mechanics are added to the game. The main one is a Day and Night cycle, where the first lap starts at day time, then the second lap continues with night and then at the final lap, it changes to an eclipse. The second one is Subterranean Racing allowing players to drive on the walls and ceiling of a tunnel, as well as drilling into the ground of the track to race under it. Most of the Nitro Tracks have the Anti-Gravity sections placed in the Subterranean sections of the tracks, while a few others are placed on the main parts of the tracks, like in Mario Kart 8. 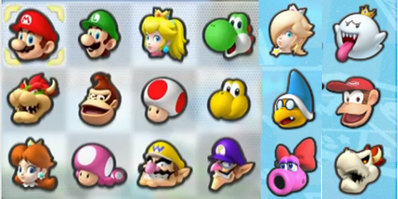 Some minor changes have been made to some of the game modes:

Unlike past Mario Kart games, the items are split into categories, Racing and Battle. The Racing items only appear in Grand Prix, Time Trials and VS Mode, while the Battle items (hence the name), only appear in Battle Mode.

Retrieved from "https://fantendo.fandom.com/wiki/*Mario_Kart_9*?oldid=3108730"
Community content is available under CC-BY-SA unless otherwise noted.