"Sh" is a playable character and a major character in Subjugation. She is a prisoner of Guillotine End Institution, and a participant in the prison's Battle System. "Sh" is a mute girl who speaks using a unique version of sign language that only her brother, "Lull", understands.

"Sh" is a teenage girl of relatively small stature. Her most prominent feature is her rich purple hair which she mostly wears in a ponytail and, according to her brother, is natural and a side-effect of her powers. She is heavily connected to the colour purple, as she has fuchsia eyes and commonly wears a purple shirt with a flower silhouette under a jean jacket. Aside from her shirt and jacket, she wears a short navy blue skirt, and long white socks under larger blue boots. Unlike most other prisoners, she does not wear the cuffs that suppress her powers.

When "Sh" was seven years old, her powers first manifested; though no one but her realized it. She once unintentionally used her powers to place blame on a classmate of her's for starting a food fight, knowing full well that it was her best friend who started it.

Though Cardinal was the first human with abnormal powers, "Sh" was, at the time of her being imprisoned in GEI, the youngest person known to have them; a title she would keep until Parker's imprisonment.

Though no staff members of the prison would reveal why "Sh" was imprisoned in Guillotine End Institution, some of the prisoners that she trusts most - namely her brother and Cardinal - know the reason behind it.

"Sh", though mute, seems to exude an aura of positivity that can calm an entire room. She is an optimist, who always looks forwards to the future, even though it may not be as peaceful as she believes it to be. She also does not seem to mind being in a prison, considering it more like a boarding school as she tries to get along with all of the inmates; though few try to reciprocate her kindness.

The abilities that "Sh" holds within her can not be suppressed by the cuffs developed by Yaroslav, as she can not control them to a certain extent. These powers are, put simply, the aura of positivity that radiates from her. This power allows her to subconsciously alter the thoughts of anyone near her in subtle ways. She can also channel her aura into a shield to use as protection, or a spear that she uses for self-defence; though these weapons manifest on their own, and "Sh" can not summon them on command. Though these abilities pain her and she dislikes having to use them, she is forced to use these abilities to participate in the Battle System.

"Sh" appears as a playable character in Subjugation.

"Sh" appears as a downloadable potential romantic partner in Banned from Fantendo. She can only be romanced by a female Rene in one of her Homo Routes. 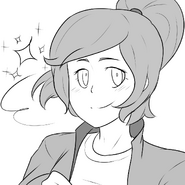 Retrieved from "https://fantendo.fandom.com/wiki/%22Sh%22?oldid=2971644"
Community content is available under CC-BY-SA unless otherwise noted.