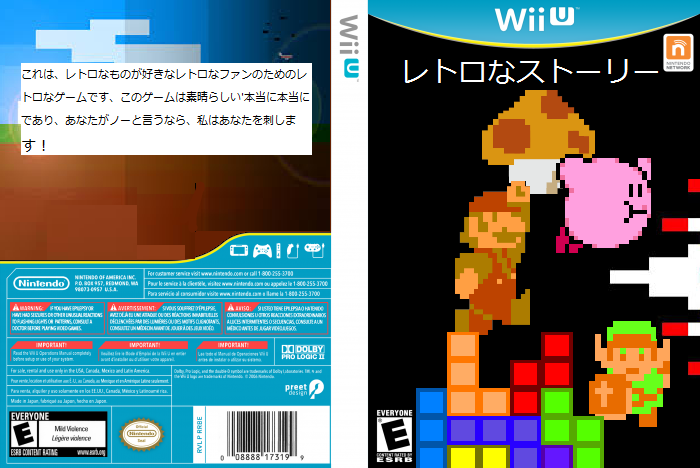 Retro Story is an Wii U game that includes this 5 NES classics. The game is only available on Japan for unknown reasons.

Super Mario Bros. (スーパーマリオブラザーズ Sūpā Mario Burazāzu?) is a 1985 platform video game internally developed by Nintendo EAD and published by Nintendo as a pseudo-sequel to the 1983 game Mario Bros. It was originally released in Japan for the Family Computer on 13 September 1985, and later that year for the Nintendo Entertainment System in North America, Europe on 15 May 1987 and Australia in 1987. It is the first of the Super Mario series of games. In Super Mario Bros., the player controls Mario and in a two-player game, a second player controls Mario's brother Luigi as he travels through the Mushroom Kingdom in order to rescue Princess Toadstool from the antagonist Bowser.

The Legend of Zelda (ゼルダの伝説 Zeruda no Densetsu?), taglined The Hyrule Fantasy in its original release, is a 1986 video game developed and published by Nintendo, released in North America in 1987 and designed by Shigeru Miyamoto and Takashi Tezuka.[2] Set in the fantasy land of Hyrule, the plot centers on a boy named Link, the playable protagonist, who aims to collect the eight fragments of the Triforce of Wisdom in order to rescue Princess Zelda from the antagonist, Ganon.[3] During the course of the game, the player sees Link from a top-down perspective and must navigate him through the overworld and several dungeons, defeating enemies and finding secrets on the way.[4][5]

Tetris (Russian: Те́трис, pronounced [ˈtɛtrʲɪs]) is a Soviet tile-matching puzzle video game originally designed and programmed by Alexey Pajitnov. It was released on June 6, 1984,[1] while he was working for the Dorodnicyn Computing Centre of the Academy of Science of the USSR in Moscow.[2] He derived its name from the Greek numerical prefix tetra- (all of the game's pieces contain four segments) and tennis, Pajitnov's favorite sport.[3][4]

Galaga (ギャラガ Gyaraga?) is a fixed shooter arcade game developed and published by Namco in Japan and published by Midway in North America in 1981. It is the sequel to Galaxian, released in 1979. The gameplay of Galaga puts the player in control of a space ship which is situated at the bottom of the screen. At the beginning of each stage, the area is empty, but over time, enemy aliens will arrive in formation, and once all of the enemies arrive on screen, they will come down at the player's ship in formations of one or more and may either shoot it or collide with it. During the entire stage, the player may fire upon the enemies, and once all enemies are vanquished, the player will proceed to the next stage.

(The info of the games was extracted from Wikipedia)